The Facts About Replacing a Roof in the Winter 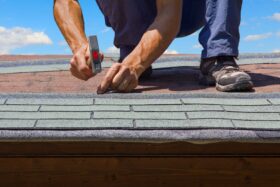 Learning the Best Times To Replace a Roof

If homeowners are going to replace a roof in the winter, Napa is probably one of the best areas in the country to do it. It is a place that welcomes mild winters that tend not to get below 33 degrees. So, is it a good idea to replace a roof during a Napa winter? The bottom line is, if homeowners are in desperate need of a repair then any time of year will have to do. That said, there might be a few disadvantages to having a roofing job done in the winter. Continue reading to learn all about the best time to have a roof replaced and why.

Is There Such Thing As Too Cold of Temperatures?

There technically aren’t too cold of temperatures to replace a roof in. it just gets more technique-focused when there is snow on the ground. Napa gets pretty chilly but it luckily doesn’t snow much – if at all. This helps with getting a roof installed in the winter months because the roofers don’t have to worry about removing snow before they begin, alongside other obstacles.

When Is the Ideal Time To Replace a Roof?

Ideally, roofing replacement is done in temperatures between 40 and 85 degrees. Replacing a roof in these temperatures means the roofers won’t have as many precautionary steps to implement and the asphalt shingles are likely to respond and seal the best during these temperatures as well.

Still, roofing contractors can buy things like hot boxes to store the shingles in so they don’t get too cold or freeze. This will also help speed the process along because they don’t have to worry about the cold temperatures as much if the hot box keeps the supplies from freezing, to begin with.

Although it is possible to install a roof in the winter months, roofing contractors are still likely to run into possible obstacles and disadvantages.

A few common disadvantages include:

The best way roofing contractors can avoid sealant issues is to hand seal each shingle onto the roof. This will protect the roof during the winter months until it heats up enough in the spring.

Napa homeowners can leave the planning to the professionals at Modern Method Roofing for all of their roof replacement needs. This company has served the Napa community for 63 years and they aren’t going anywhere any time soon. Just look at their customer reviews for proof of their top-notch service! Call today to schedule!

Tweet
Dear Bob,
I think about your company
every time the rains come.
You guys did a good job.
Thanks for the gutter guards.
I'd recommend you to everyone. Thank God for Modern Method Roofing!